Parish > Figures from the past

George was born in Clee near Grimsby Lincolnshire on 14 th Oct1855.  His parents, James and Eleanor, had moved from Wexford to Grimsby for work, James taking a job as a Customs officer.  George was one of 8 children, James, Matthew, Patrick, Christine, John and the twin daughters Ellie and Minnie.  The brother John was later to become "The Major" in Ogbourne Maizey.

Edwardes did not perform well in school and when the time came to leave and find employment the family sent him to London to cram for the entrance exams for an Army career, which he failed.  However, he lodged with a Jewish diamond merchant, Mr Isaacs, who was to remain a lifelong friend and backer to George in his later career.  George`s cousins were Irish theatre managers John and Michael Gunn, who owned the Gaiety Theatre in Dublin and by coincidence he met one of them, Michael Gunn, at the time when he had failed his exams and was looking for work.  They asked him to manage one of their touring companies with a show called "The Lady of Lyons".  This opened the door to the world of the theatre for George.

Having completed the tour George took a job as box office manager to Richard D`Oyly Carte at the Opera Comique in the late 1870`s.  D’Oyly had just enlisted the services of Gilbert and Sullivan for his theatre. George helped to produce several of their famous comic operas.  During this time, he added the "e" to his surname.  He also met his future wife, Julia Lavinia Gwynne [Gwynnie] although at the time she had a boyfriend and it would be some time before they became romantically involved.  Julia became a principle player at the Opera Comique.  D`Oyly Carte, building on his successes built the Savoy Theatre and George moved there in 1881.

In 1885 Edwardes succeeded  John Hollingshead  as manager at the Gaiety Theatre, producing the  burlesques  in which the Gaiety specialised.  In 1886 Hollingshead retired and George bought his share of the Theatre with money lent by his old friend Mr Isaacs.  From then on the Guv'nor (as Edwardes came to be known) was in charge, with the assistance of the theatre's star player, Nellie Farren.

George continued to have great successes; he brought the Can-Can and The Merry Widow to London amongst many others.  He produced a series of highly successful shows at the Gaiety, however the audiences were used to burlesques, so Edwardes went back to producing full-length pieces with original music, instead of scores compiled from popular tunes.  These new burlesques were very successful and toured widely in Britain and abroad (Australia and America), coming to a natural end in 1892.

Edwardes produced shows at other theatres as well.  In 1892, he took over the  Prince of Wales Theatre  and produced Gilbert's His Excellency at the  Lyric Theatre.   He also became manager of the struggling  lt Empire Theatre , London, and transformed it into a  music hall  before it became associated with several successful  ballets  under the composer-director  Leopold Wenzel .

Wishing to build his own theatre he bought a site in Cranbourne Street but overreached himself as he had to come to a financial arrangement with a Mr Augustus Daly (an American Impresario) to enable completion to take place.  Because of this the Theatre was named "Daly`s". Eventually he bought Daly out but by then the name had stuck.  The shows at Daly's had more coherent plots and more romantic music specifically composed for the plot of the piece, rather than a collection of topical popular songs.  They were more like musical comedy than their Gaiety Theatre siblings, the more review-like "Girl" musicals.  A series of hit shows followed, culminating in a series of English-language adaptations of European operettas including the Merry Widow and The Count of Luxembourg in 1911.

The glamorous Gaiety Girls were, as The Sketch noted in its review of  The Geisha in 1896, "clothed in accordance with the very latest and most extreme modes of the moment."  Many of the best-known London couturiers designed costumes for Edwardes' productions.  The illustrated periodicals were eager to publish photographs of actresses in the latest stage hits, and so the theatre became an excellent way for clothiers to publicise their latest fashions.  The girls themselves were fashionable, elegant young ladies, unlike the corseted actresses from the earlier burlesques.  They became a popular attraction and a symbol of ideal womanhood. They were much sought after by the "stage door johnnies" of the 1890s - some of them becoming popular actresses or marrying into society and even the nobility.

Alan Hyman wrote in The Gaiety Years "At the old Gaiety in the Strand the chorus was becoming a matrimonial agency for girls with ambitions to marry into the peerage.  A fashion had started - a score of the Guv'nor's budding stars left him to marry peers or men of title while other Gaiety Girls settled for a banker or a stockbroker and so the Guv'nor had a 'nuptial clause' inserted in every contract.  Debutantes were competing with the other girls to get into the Gaiety chorus while upper-class youths were joining the ranks of the chorus boys.

Edwardes also used the  Apollo Theatre for several musicals and as his success grew, he needed another theatre and added the  Adelphi Theatre to his chain of musical houses. There he produced a series of musicals by  Lionel Monckton, amongst others.  Other theatres included Lyric and the  Empire Theatre of Varieties. Edwardes was a founder member of the Society of West End Theatre Managers.

In 2017 the The Music Hall Guild of Great Britain and America placed a "Blue Plaque" on the Hampstead house of Edmund Payne  (14 December 1863 – 15 July 1914) who was a leading comedian and singer best known for creating many comic roles in a series of extremely successful plays for George Edwarde's Gaiety theatre. ( see the Wikipedia entry for Edmund ).

George enjoyed horseracing, and on 15th April 1901 he bought Ogbourne Maizey Manor.  He now owned his own stables and horses and was helped by his brother John (The Major).  There was also a stud in Ireland.  His colours were Turquoise with white chevrons.  His biggest winner was San Toy ridden by Rickaby which won the Ascot Gold Cup in 1901.  A feature of his tenure in Ogbourne were the parties held at the Manor, where the villagers turned out to admire the retinue of beau-monde taking their walks on the downs and Gallops. 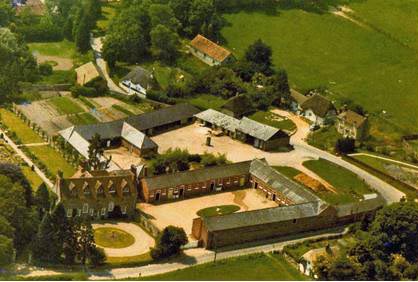 George had his first stroke just before Xmas 1912. He took "cures" at Bad Nauheim and whilst there in 1914 World War 1 broke out.  He was imprisoned in Germany for several months, which exacerbated his health problems.  He was repatriated on medical grounds and on his return his hair and beard had turned white.  On August 10th 1915 whilst in Scotland taking a cure at the Station Hotel Turnberry (he played golf - but apparently not well) he suffered a further stroke. He returned home to London and died of yet another stroke in October 1915 at his home in Regent's Park, London, just before his 63rd birthday.  He was buried at  Kensal Green Cemetery, and was survived by his wife Julia.

Although Edwardes left valuable properties, he was also heavily indebted.  His theatrical enterprises continued to operate under the guidance of  Robert Evett, who managed to produce a number of hits over the next few years, notably the highly successful  The Maid of the Mountains and  The Boy, that paid the estate debts.

His son Major D`arcy Edwards 1st Royal Dragoons inherited the estate. However on 10th July 1916 he was killed in action at Mametz Northern France close to St. Omer.  With the state of the finances the family sold up their properties in London and moved permanently to Ogbourne Maizey.

In 1916 Norah married Paddy Hartigan, the new trainer, and moved into "Bonita" - further along the Rockley road and they continued training there.  Dorothy, Cuthbert Sherbrooke and Gwynnie continued to live in the Manor and run the farm.  The adjacent Stables were let in 1926 to "Teddy" Martin, another trainer.

Gwynnie Edwardes died in 1934 and Dorothy and Cuthbert moved to "The Cottage" close to the Manor.  They continued to run the farm for several more years.  The Manor house was sold to Mrs Hall and the sub-letting of the Manor Stables continued to further trainers.  The village now had two thriving training stables …. but that is another story.