Parish > WWI > "There name liveth for ever" > Individuals

George was born in Newmarket, Cambridgeshire in 1891; in 1911 (aged 20) he was living in Ogbourne St Andrew with his Mother Jessie (49) and his brothers Charles William (21), Harry (14) Frank (8) and his sister Annie Eliza (12).  All the adult men were working locally as Farm labourers.  In February 1915 George enlisted into the army at Cheltenham and after basic training, he arrived in France on the 9th August 1915 with the 10th Battalion, the Gloucestershire Regiment.

Between the 25th September and the 18th October 1915, The Battle of Loos took place, it was the largest British offensive mounted in 1915 on the Western Front during World War I, and was one of the so called ‘Big Pushes’. This offensive also heralded the first British use of poison gas and the battle was the first mass engagement of Kitchener’s New Army units. The British offensive was part of the attempt by the French to break through the German defences in Artois and Champagne and restore a war of movement from out of the stagnation of the trenches. Despite improved methods in both tactics and doctrine, the stock piling stores of ammunition and better equipment the Franco-British attacks were contained by the German armies.  In the few day leading up to the 13th October 1915, the Loo’s offensive was in a state of renewal after an earlier French Offensive was stalled at Vimy Ridge and a German Counter attack was halted with heavy loss.

The following description of the 1st Division assault which took place at noon on the 13th October 1915:
Noon: Heavy British bombardment opens up. 54 heavy and 86 field howitzers, with 286 field guns, fire for two hours on enemy trenches in or approaching the Hohenzollern Redoubt, Fosse 8, the Quarries, Gun Trench and the positions south to Chalk Pit Wood. (This was to prove too light to do sufficient damage to the enemy positions and barbed wire defences).
Noon: French shell German positions on Hill 70 and in Bois Hugo.
1.00pm: Gas and smoke is discharged on three fronts: South-West of Hulluch by 1st Division; between the Hohenzollern Redoubt and the Vermelles-Auchy road by 46th Division and between the road and the canal by 2nd Division. The discharge continued until 2.00pm, (Although the gas was stopped at 1.50pm, giving the enemy ample evidence of an imminent infantry attack). A heavy German bombardment opens on the area occupied by 46th Division.  2.00pm: the infantry attacked (although some units started a few minutes earlier). Led by 1st Brigade, the attack of  1st Division (Including Pte Lea with the 10 th Gloucester’s)  against 1400 yards of enemy positions along the Lens-La Bassée road between Loos and Hulluch was hit by fire of increasing intensity as they approached the German wire 300 yards away. They found that only four passages through the wire had been cleared by the bombardment and despite efforts to cut through, the attack was halted. The survivors withdrew after dark; the Divisions suffered 1,200 casualties in this fruitless assault. 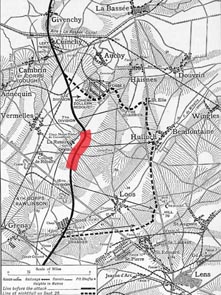 During this British offensive on the 13 October 1915 George Lea, was Killed in action.

When the 10th Battalion, the Gloucestershire Regiment took the roll following the attack, of a Regiment of 700 personnel, 459 were either wounded or killed, the majority having been in the first front wave of the assault.