From at least 1900 until 1937 the village had two adjoining pubs, or rather an inn (‘The Wheatsheaf’) and a beer house (‘The Axe & Compass’).  The 1891 census shows the members of the Smith household at the Axe & Compass where Thomas, the licensee, was assisted by his wife Catharine in the running of the beer house.  Thomas also had a carpenter’s and wheelwright's shop on the premises.  After the death of her husband in 1901 Catharine continued to run the beer house, no doubt supported by her daughters. Her photograph (below, left) can be dated to between 1901 when Thomas (the former licensee) died and 1915 when Catharine herself passed away away. Her photograph seated (below, right) would also appear to have been taken during this period.  An interesting insight into the possessions of the family is provided in the inventory that was carried out upon the death of Thomas in 1901. 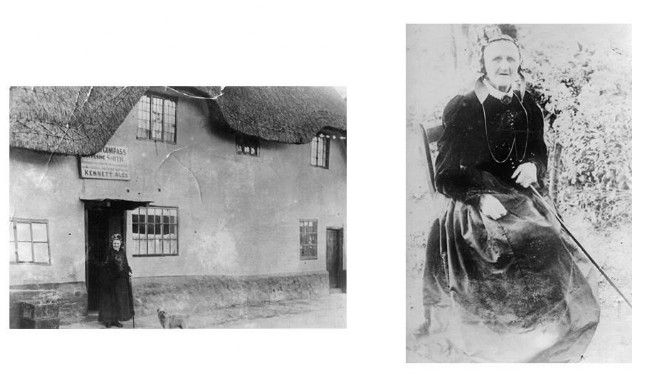 The sign above the door shows Catherine to be the licensee and the beer was supplied by the Kennett Brewery.  This brewery stood on both sides of the present A4 main road just east of West Kennett Farm and was renowned for the flavour of its ales, attributed to a spring rising within the brewery. It was sold to Stroud Brewery but closed around 1931.

Catharine’s daughters, Catharine (aka ‘Kate or ‘Kitty’) and Miriam (photographs below) took over the operation of the Axe & Compass and an insight into their characters and how their business apparently changed over time is obtained through these memories recorded by Dickie Brown …..

‘…. It was owned by two sisters, Miriam & Kate Smith (who are buried in the churchyard).  They ran it in the 1930’s and ran a little sweet shop where the children spent their ha’pennies.  They had a parrot, which the stable lads used to feed toffees so it couldn’t squawk, because every time the door opened the parrot would go "Kitty, Kitty, Shop!".  Through the front door were two rooms, one the sweet shop the other a little sitting room. [not clear when the beer house changed to a sweet shop or if "the sitting room" was in fact the bar.]  Miriam was a docile little woman who "wouldn’t say boo to a goose". Kitty was twice the size, with a big red face. If the children played around the sisters‘ front door, Kitty didn’t say clear off – she was straight out with a horse whip, which to boys in short trousers was a shock – you certainly knew it!.  But Kitty had a heart of gold and next day in the shop she would say: "Was it you that last night, got the whip?"   "Yes Kitty."   "Well you shouldn’t have been there should you?"  But then out came a handful of sweets - there was no malice there.' 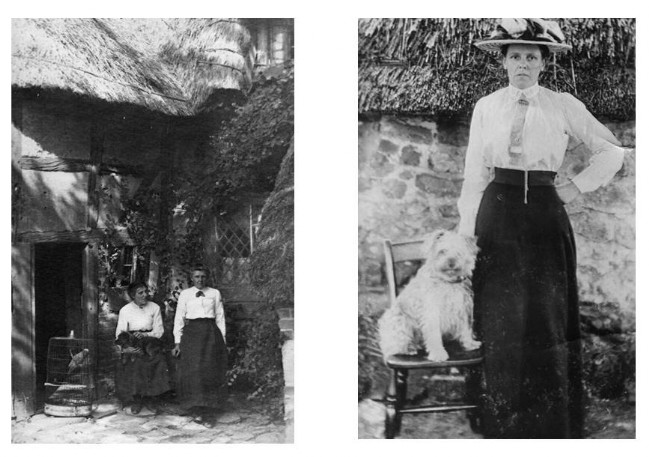 It would seem that that the operation of the beer house ended by 1937 when Kitty died and Miriam’s sweet shop by 1947 when she passed away. But before then the three sisters had dedicated a plaque, which may be found within the church, to the memory of their parents and brothers.

By the 1950s the Axe & Compass was being used for rented accommodation until Ushers Brewery (owners of The Wheatsheaf) acquired the property and, as coach and motor car custom was expanding rapidly at that time, the old beer house was demolished to make way for the car park.